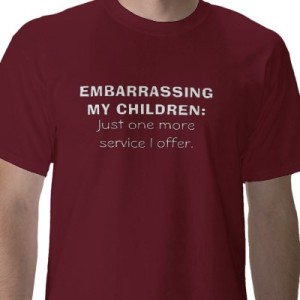 In our local rag yesterday, a friend of mine and a very funny man, Dave Martin , wrote about how he now had become a social gaffe on legs for his daughter. I loved the article, but I just gotta tell you Dave, you aren’t trying hard enough!

I vowed I would be the most embarrassing parent ever after years of  putting up with my kids shaming of me in public.  My daughter used to only want to breastfeed in public when I was wearing white.  She’d hide behind me at school concerts for her daycare and was so silent at a parent drop in that when she said one word at the last day, the place stopped in shock. It might have been because the word she said was “stick”, which made it sound like I’d told her to not say dirty words and those were all she knew.

My youngest son used to come grocery shopping with me, look around for an audience, then ask me “Mummy, could I please have some juice?  I’m so thirsty…” and then curl up in a cringe as if I was going to slug him. When that wasn’t shocking enough, he started saying, just loudly enough to be heard, “Please, mummy, don’t hit me like the last time…” I was working as a public health nurse at the time and already hiding the chocolate he was driving me to crave under layers of healthy food, so you can imagine how that went over.

My other son refused to trade in his worn out runners even when the scent coming from them of sweat and mould and footrot was strong enough to be visible.  We’d go places and people would start looking around for the source of the stench and I’d make some excuse and run off with him before they could trace its origin.

And don’t even get me started on the days in stores with those cute little shopping carts for the kids.  These three banshees screaming around a huge grocery store, endangering eyes and legs of fellow shoppers….I’d just hide in the bakery section until they tired and the maimed were taken away. Is it any wonder I gained weight?  But the bakery aisles had good hiding spots…

So, overall, I felt I owed them some shaming.

I took to singing – and dancing – to the Musak in those grocery stores.

I’d pick out items of clothing (preferably underwear) and walk them across the aisles to see if they “walked well”. Had to stop when my daughter threatened to leave after I walked a bra across the hall to see if it swished well. (my dad was the genius for that one).

I’d talk to complete strangers and (gasp!) even smile at them.

I’d drive them to school and then holler out of the window “Have a sunshiney day!” in my best “good mother” voice.

When they got cranky in stores, I’d ask them, “Do you need love?  Is this why you are acting out?  Do you need a hug?”

I’d talk to their friends, and even make them laugh.

I’d take them to parent-teacher nights and ask the teacher to tell me, really, how they were in class.

And once I trimmed my son’s hair and by accident shaved a bald patch and never told him, hoping no one would notice.  (He still hasn’t forgiven me.)

You have to take advantage of these times, Dave. There’s only a small window between when the kids think you are gods and goddesses unto earth and everything you do is fun, and when they just smile at you indulgently and treat you as senile.  I think the greatest effect is when they are between 11 and 17. It’s tough to fit in all you really want to do to them.

I’m already past that phase, alas.  The other day my grown sons and I were in yet another grocery store (yes, we do occasionally go elsewhere) and I did a few dance steps to one of the songs – and my son joined me.

Check out Dave’s very funny articles alternate Sundays in the Ottawa Citizen, or click on his name above and you’ll be redirected to his book, available on Lulu.com.