There was an article in the local rag today about how a woman and her son had been arrested after the bodies of 37 cats had been found buried in their back yard. Horrible, but…

This put the fear of retribution back into the easily terrorized corners of my mind. I mean, what parent doesn’t have a complete pet cemetery  in their back yard?  I mean, of any parent that allows their kids to keep pets, that is. You know, those tiny “pocket pets” that don’t take kindly to being kept in pockets, or kissed, or handled, or ignored.

I’m still waiting for the lawsuit from the guy who bought one of our houses.  It was during a relatively heavily laden pet time in our house, where there were no end of fish, gerbils, hamsters, rats, mice, birds, guinea pigs – and those were only the approved tenants. Of course they died – the fish because, well, they are fish.  Fish die. Always.  My son was keen on goldfish (died), guppies (died) and finally Betta Fish (lived – the best pets ever!). He named each one, he cherished each one, he cared for them as well as he could.  We spent millions on treatments for ICH and other disgusting diseases and the poor guy has gone into studying water remediation partly because he suffered so when each one died. Each one had to be buried, carefully wrapped in tin foil and sealed in a film container (he’d read the ads about “seepage bothering your loved ones” from an agency selling stainless steel caskets, and he worried about seepage bothering his fish.  In vain I argued that fish LIKE dampness.) We would bury them in one part of the garden, place a special marker, offer a moment of silence, say the proper words. “He was a good fish, always let the other fishies eat before him, swam really well even when he was on his side…”

Eventually, the sorrow got to him and he joined his siblings in the rodent parade. We already had a dwarf hamster, a senior hamster from a friend who didn’t want it anymore, a mouse, a gerbil, a guinea pig, and now he wanted a hamster of his own.  He saved up, bought one from the local pet store  which was, unfortunately, too young to be sold.  He named it “Flash” because it ran so fast. It died within a day. We buried it in a different corner of the garden, wrapped in a juice can sealed with tin foil.  The service was brief but intense, as my son was now convinced he killed things by his breath alone.

The other kids’ animals died too, in turn. Gerbils developed seizures, rats got cancer, hamsters developed mammary cysts, guinea pigs overgrew teeth and got horrible things wrong with their bowels that I won’t go into here. It was a long long life of funerals, interspersed with the endless purchase of better cages, expensive medicines, and runs to the vet with various animals.  Getting the guinea pig’s teeth filed alone cost us over $200. Did you ever guess guinea pigs needed their teeth filed?  I didn’t.  The vet said that in the wild the pigs are eaten before their teeth get long.  It’s a design fault.

They ate fresh organic vegetables, gently rinsed in spring water, their beds were soft and cleaned more than I washed our sheets, we sang them lullabies and let them play and poop freely, peeled them orange segments and hand fed them when their teeth were sore.  But these tiny creatures are short-lived, and gradually the backyard garden became filled with little sealed containers.

The dog started to hang about in the garden with a lean and hungry look. Why beg for treats, when, with a little digging, he could get lovely smelly things for himself?

Of course, this IS Canada, and often the ground was too hard for burials, so our freezer ended up getting filled with tiny corpses. The worst were the guppies.  Each sealed in a tin foil shroud, they would be placed along the side of the freezer so they wouldn’t be forgotten when spring came again.

One fall tidying up time I was clearing out the freezer and found ten little corpses of fishies and one of a rodent (unspecified as I didn’t want to check).  After that I convinced my son that fish corpses would prefer to be flushed.  Like earth to earth, right?  Water to water? We changed the funeral services and stood in sadness around the toilet, watching them spin around and around disconsolately until they vanished. I planned to do a series of framed pictures of each one to decorate the site, but couldn’t keep up with the demand.

We ran out of suitable burying space in our small yard, so my daughter insisted we do a Viking burial for her mouse, who had conveniently perished in a wooden chew ball.  We took ball and mouse to the lake front, built an origami paper boat, tried to set it alight as it headed out into the waves.  The boat collapsed and the wooden ball, intact with dead mousie, floated away out of range. All I could see was some poor child running down to the beach at their cottage, spotting the wooden ball as it washed up on shore, exclaiming with joy and then horror as she saw its contents. Years of therapy follow…

Time came to move from the house. 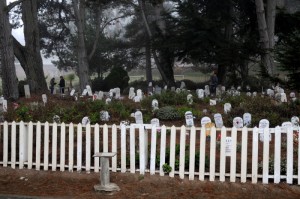 We sold it to a fellow with two Border Collies.  We had to change our names and delist our phone number so he couldn’t find us when they went crazy and dug up all the film containers.

But it’s a small town. Maybe one day he’ll catch us. I wonder what the prison sentence is for pet deaths from over-kindness?

One thought on “Animal cemeteries, or, is that dead gerbil still in the freezer?”