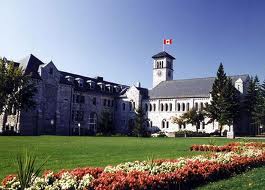 A few weeks ago I received a sinister invitation in my email box from my alma mater.  Apparently in a moment of utter foolishness, I’d volunteered to be the contact person for our next reunion, our 30th. According to the astonishingly youthful alumni advisor, this date is coming up.  I could cheerfully crumble into a pile of aged limestone (I went to Queen’s, dontcha know) at the thought of the 30 years difference from the person I still see in my mind’s eye BEFORE I look in the mirror and the one I see afterwards, but I got to thinking.  About Queen’s.  About my time there. About the people I knew there.

I was a transfer student from University of Washington, and as such got to skip the usual frosh frivolities and enter the much more serious-minded drinking of the transfer student group. I met a clump of people from CEGEPs in Quebec, and made some lifelong friends from there – at least I think I did as some of them stayed around even when sober. I met my first Queen’s boyfriend in that group and we had a perfectly lovely time, even when he tried to hit me in the face with a pie for my birthday (I grew up in Boston, so he went for an appropriate Boston Cream Pie, little realizing it was really a cake.  It bounced off me quite harmlessly, but the thought was there). We dated for almost a year, and then dated again later. Sweet man.

I met my  first roommate that year, too – a stunning blonde who eventually went on to study law.  Not before we had fisticuffs outside the Prince George Hotel, though.  We’d been drinking with some RMC Cadets and she wanted to go home and I had something urgent to attend to before we walked the long way in the cold, if you get my drift, and she refused to wait for me and we actually had a bouncing off the sidewalk fistfight to decide.  It was over shortly because both of us were weaving a teensy bit and kept missing each other. We must’ve looked hilarious. She’s still a fighter, but has taken it into jurisprudence (and the occasional Starbucks).

My nursing classmates – well, they were warm and funny and smart and occasionally odd and I’ve reconnected with a few of them via Facebook and other means. One of them has remained by best kindred spirit friend through all these years. They were always much more organized and motivated than I was, dressed better, came to school prepared. I’m curious about them.  So much has changed in my life since I last saw them – I wonder what’s been happening in theirs?

I remember endless nursing clinicals, the dreaded lab sessions where we had to give bed baths to each other – and one lengthy series of classes where we were supposed to be learning about research but spent it instead on a prof’s study about how long it took oral temperatures to return to normal after a glass of ice water. Totally exciting. Not. I remember our wild anatomy professor who stood on his lab table to illustrate the uterus and fallopian tubes. I remember making my labmate shriek when I pulled the shoulder tendons on a cadaver’s arm we were studying and made the fingers move. Lost a boyfriend over that. He didn’t have the same sense of humour as the first one, who would have probably just turned green and then done a Muppet joke. Wacka wacka wacka.

I remember dances, long days spent in the health library, long nights spent in the pub. I remember drinking awful coffee out of those vending machines that never failed to leave a pile of grounds in every cup. I remember walks by the lake, studying in my apartment, the peaceful sound of snow days in Kingston, the glorious Mays. It was good, even the Kraft Dinner and the month I lived in a basement with nothing but bread and strawberry jam to eat. My roommate and I couldn’t afford the laundromat so we’d hand wash our uniforms and nylons and then run in circles around the apartment to dry them.

I wasn’t a keen student, most of the time.  I wanted to learn what I needed to know, but my curiosity wasn’t piqued by most of my courses. It wasn’t until I got to third year that things began to fall into place and suddenly I was mature enough to understand what a treasure this time really was. When would I again have the luxury of studying only, of stretching my mind while not having anyone depending on me to do anything else but?

Well, for better or worse, the knowledge bug bit me and I’ve been unable to stop learning, taking courses, studying. It’s all been wonderful and I’m even signed up for a course this September again and can’t wait.

But oh how I miss my classmates and the times we shared.  So perhaps organizing this reunion is just the thing. I’m looking forward to wandering down the lane with them. But maybe I’ll skip the Kraft Dinner.