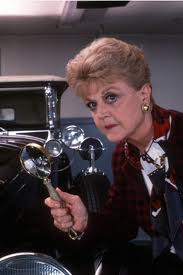 Angela Lansbury checking the garbage sorting area of the garage

A few years back, I remember reading a story about a woman who was found, cut into bits, in dumpsters all over the city.  The newspaper added, “Police state that the death….was suspicious…”

I couldn’t help myself from visualizing some guilt inducing mother somewhere dragging herself along the byways of the city, hollering, “Never come visit your mother, do you?  Why I may as well cut off my own leg as talk to you..” and then doing so, jettisoning it into the dumpster and hopping along, still shouting, “I’ve had a really bad day, I have, and no concern from you. I gave my right arm to have you, don’t you know?”, cutting that off, hopping to the next.  You get the picture.

Okay, maybe not everyone finds that image funny, but my mum was of the “you have a headache?  I have a brain tumor” type, and I could see her passionately chopping herself up all while asking where she went wrong just to create that infinite guilt that all we Catholic-raised, mother-intimidated wallow in.

I write murder mysteries now, thanks to the same mum, who introduced me to the guilty pleasures of Nero Wolfe and Earle Stanley Gardner.  But it’s tougher now. I’ve just moved to Nova Scotia and regularly stand, small sac of garbage in hand (no bodies), perplexed, at the infinite garbage/recyclable/compostable/chewable/reusable  discard choices.  I avoid going to fast food places because, quite frankly, I’m not sure if their leftover food is compostable, and I’m deathly afraid of throwing away some form of plastic that could, somewhere, be recycled into plastic mats that can’t be recycled.

So the question arises, where would one put a body?

I mean, assuming you have one, hanging around, that you don’t particularly want found.

If you throw it in the garbage, you are not only a murderer of people, you are killing the environment.  I’m not sure which would be viewed with more disdain.

You could throw it in recyclables, but only if you, or the victim, believed in reincarnation. And would you enclose it in a specially formatted clear bag, which here in NS are the only kind the recyclers will take to the recycle depot?  The rest they just throw in the garbage anyway, leaving you in the earlier situation. (I don’t know if anyone has considered the net environmental effect of all those newly created plastic bags, but someone, in their great wisdom thinks it is all good.) But the bags aren’t very sturdy, so you’d have the problem of dragging the body in the bag and putting it in the right container – as it isn’t glass, or cans, or plastic (unless you killed someone from Hollywood, say), you’d be a pretty long time gazing at the box trying to figure out where to put the body. Which could lead to capture, and the early end to your potentially remunerative life of crime.

Okay, then, what about compostables? In the old green bin. Probably okay, as long as the body didn’t have any replaced parts. In big capital letters over our green bin at my apartment it says, “NEVER throw plastic in the green bin!” I’m not actually sure what disaster occurs if you are foolish enough to put plastic in a green bin, but suffice to say it probably kills the environment. Kill a granny and you risk environmental opprobrium because of that replaced hip. And what about all the mercury in dental fillings? If you poisoned your victim, you run the risk of damaging the entire municipal composting program. Run off and all that. If you shoot them – well, unless the bullet made it all the way through, you’ve got metal contamination. Would you have to take out all the pins for broken bones? You’d have to X-ray them somehow to check for all this, again, risking capture unless you are clever enough to be a radiologist or something and can sneak bodies into the hospital at off hours to X-ray them.  Of course, now there ARE no off hours, with patients dragging themselves in at 3 AM for a hip X-ray, so while you would likely not be noticed, you’d also be fighting for time slots.

Oh the heck with it. Maybe it’s better just to throw them in the dumpster after all. It’s just too complicated.

Follow DA's Ephemera and Etceteras on WordPress.com
Join 1,391 other followers