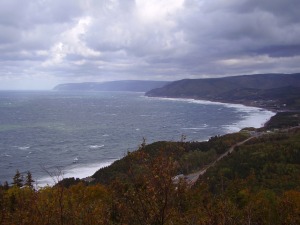 Way back about 15 years ago, when I lived in Annapolis Royal, NS, I had two CD’s in the van that I would play as I drove the kids here, there and everywhere. One was Rawlins Cross, a celtic rock band that provides the definitive answer to the question of whether bagpipes can rock. They can. I still love those guys.

The other was an Atlantic music CD that I lost and was never able to replace. On it, there was a song that spoke so directly to my heart I used to cry every time I heard it. It was Stone and Sand and Sea and Sky by the Rose Vaughan Trio. Today, thanks to the wonders of the internet and Seaside FM that played a similar song and sent me hunting, I found the song again on YouTube. It still makes me cry, hard. I’ve been looking for the song for years, and never been able to find it. Now I just need to find the actual recording.

Like the Rawlins Cross song “Open Road”, which I also played obsessively back then, both songs spoke to me. I knew my marriage was over, although it would take me years to finally leave. I felt broken when I arrived in Annapolis Royal for a variety of reasons – the loss of my parents, the state of my marriage, the life of a parent of young children with an absent partner. I was fat(ter), ugly, unhappy.

And then I came to Nova Scotia. I was healed. Four wonderful women believed in me; they made me feel valued, like I had something to say and contribute. One got me into public health nursing, two got me into political activism, and one was the tow line that brought me back home. With their help, I was able to throw off the things that were holding me down, whether mine or someone else’s. I became who I am today, and , although I’m definitely not perfect, I’m at least closer to good (and parts of me are excellent, as Ashleigh Brilliant would say).

I left Annapolis Royal, and didn’t really return to the province until a kind friend took me with him on a breathtaking road trip around Cape Breton. I knew then that Nova Scotia and I were meant to be together, forever. I planned and sorted and finally came, and I haven’t regretted a moment since. I feel like I have been reunited with my soul.

Lately, I am feeling blessed. Several good things are happening to me, and it’s a nice change after a bundle of bad. Into every life, as they say, some rain must fall, but one assumes that that means some sun arrives as well. I’m grateful for both, as they teach me as they go along, but I’ve gotta say, I like the sunny days a wee bit better.

I can’t help but believe that being so near the sea (and stone and sand and sky) has helped.

Early morning rise and walk
Listen to the sea stone talk
Wild geese flock above me high
Stone and sand and sea and sky.

Soon the wind is holding me
Clears my mind so easily
Open, open to the song
Wind and sea have played so long.

I am strengthened by the sea
Something broken mends in me
Hold me till the day I die
Stone and sand and sea and sky.

One thought on “I will go and not ask why…”