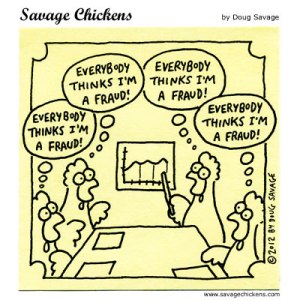 I’ve been talking with my galpals about this creeping sense of fear we all experienced at one point or another. It’s that feeling that you are merely playacting in your role, that sooner or later you are going to be caught out and proven to be completely inadequate.

The funny thing is that it happens so often that, really, we should be able to tolerate it. But it still seems a terribly frightening thing.

When I worked as a nurse, I lived in horrible fear I’d make a stupid mistake and it would be revealed that I really hadn’t done all that well in nursing school – in fact, struggled through until we got to the policy things, where I was able to cope. Sure enough, I did, I was, and eventually I moved into health policy positions.

Where I worried that I’d been promoted prematurely into management, that I was only faking competence, that sooner or later I’d blow it and I’d be caught and tossed out on my ear. Well, it was a near thing but my MS attacked before I could actually be tossed and so I was able to creep out before the tarring and feathering as my fraud was detected. (not real fraud, I hasten to add. I am nothing if not honest. Sometimes painfully so).

So now I try to write, and people tell me I can write well, but I know I’m just faking it, as I do with so many things, just faking it until someone catches me and says “Fraud! Fraud!”

And now I help with all sorts of projects, offering my expertise, but feeling as if I am playacting there as well. I am still gobsmacked that anyone would appreciate my advice, that they are not merely putting up with me so I will go away and they can talk about me behind my back. I find it hard to believe I have anything of importance to offer. And yet I keep putting myself out there, so there must be some part of me that feels I do.

Perhaps it’s paranoia, perhaps I need treatment, but I suspect there are a lot of us out there that feel the same way.

My excellent mother told us we were special, that we could do anything we wanted, that generally we could rule the world. As we went out and found that perhaps there was a teensy bit of maternal exaggeration in these statements, I think I developed this inner shadow that told me that no, we weren’t all that and a bag of chips. In fact, we weren’t even that bag of chips. The undercurrent of how we weren’t all that special after all plays in my head. Fortunately we banged into reality often in our early years and got some of the “you’re special” banged off of us before it really counted.

I can’t help but wonder about this generation of kids, who are told everyone is so special, who aren’t allowed to fail in school, who are given prizes for even showing up. How are they going to feel when they are being tested in the real world? Will they be stronger for all the lies they were told, or weaker? Or will they be tempted to brace up their feelings of superiority with real fraud?

Ah well, maybe it will all work out and they will be cheerfully, healthily competent.  Or at least much better at fraud!

One thought on “Feeling a fraud…”