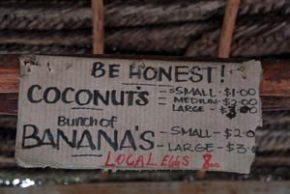 Or so the name of today’s entry tells us. Much like Canada, a country named for a native word meaning small village, today’s country, Niue, was inadvertently named for an exclamation about food. Captain Cook called Niue the “Savage Island”, another mistake, as the inhabitants are peaceable but given to eating red bananas, thus staining themselves with red gore-like substances. I don’t know if they are still messy eaters, but let me tell you, Niue is top on my list of paradises I wish I could go visit.

No poisonous animals (unlike nearby Australia). They speak English, good for the linguistically challenged or lazy.

A total of 1269 inhabitants by latest account, though since their birth rate is strangely negative, and their death rate is 9/100,000, I suspect the crowd has thinned even more. For this population, apparently they have 4 physicians (good for those of us with a disability), and support themselves by selling coconuts, honey, and souvenir postage stamps.

They grow crops here and there, but it’s the largest coral island, so arable land is small. Lots of enchanting limestone cliffs, cool pools with lots of fish to play with, whales to swim with, wonderful pathways to hike.

Curiously, there are 1200 phone lines and 600 cell phones, as well as 1100 internet users. One has to wonder who they are talking to, when a saunter down the street could link people face to face and calling costs off-island are enormous.

It hasn’t been a happy land always – newly independent -1974 -they’ve been wracked by typhoons and debt and just when they thought they had a good thing going, the international banking laws changed and they could no longer hold offshore accounts. Still, they are supported by the lovely New Zealand, so it can’t be all bad.

And the chance of visiting a coral island that probably very few of your friends will ever go to – tempting.

On second thought, don’t go. I want to get there first.