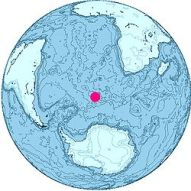 Bouvet Island is a volcanic island covered with glacial ice and surrounded by more ice, located about as far away from Norway as you can get. It’s waaay down on the southern side of the world, below the 50th parallel. No one has ever lived there. And yet, Norway owns it. They fought to have it.

And the island has been trying to kick them out ever since.

It didn’t like people earlier, either. Bouvet, the explorer, found it first in 1739, but recorded the wrong coordinates so no one else could find it. James Cook tried to find it, and couldn’t. The next explorers did find it but couldn’t land on it thanks to the glaciers and sharp hillsides. An American explorer pretendedto find it and hunt seals there but since he never mentioned the glacier, people think they maybe weren’t at the same island.

It gets more confusing because there is a secretive second island, Thompson Island, that is there sometimes, but not there other times. The UK, in trying to claim the island, got legally stopped by the question of which island they had actually landed on. 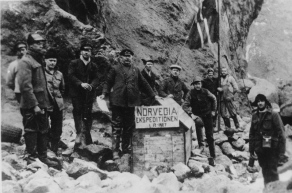 When a convenient rock slide finally allowed landings on the island, people came and built a hut for meteorological study. It washed away. They brought a more sturdy building and set it up. An earthquake happened – 6. something on the Richter scale – and it shook the building loose. It washed away, just as if the island shrugged its shoulders and tossed them off.

Strangely, it has an internet code. .bv What the he..?

Seriously, it’s a nature preserve, with thousands of migratory birds breeding there, and lots more passing through on their way to better vacation spots. Apparently they eat snow lichen. Yummy.

But if you’re human, I suggest you stay away. The island doesn’t like us much.