Why are we talking about the USA? Because it’s one of the countries on the list of where you might be from, and it’s on my mind right now. My horrified mind.

Some man went into his kid’s elementary school today and shot up the class and a whole bunch of other people. We don’t know yet whether he shot his daughter, whether this was some horrible custody fight, why the man, now dead, took it into his head to kill everyone today.

Of course it will be argued that he was mentally ill. You’d have to be mentally ill to shoot kids and teachers and such. But maybe he wasn’t as ill as all that. Big shootings are a common event down south. They seem to happen about once a month, at least. More in good weather. And they are speeding up, like in murder mysteries when the psychopath starts losing control and changes his pattern to kill more often.

Usually that’s when the detective catches the perp. Who is going to catch a country’s perpetrator?

It’s utterly horrible. Most Americans are wonderful people, most of the time the country is peaceful, bucolic even, given that most of the violent have been killed in needless international wars (oops, cynicism there). I grew up in the US, and my family members still live there. But I really don’t think I’ll ever go visiting anymore. I can’t support such a place.
You might argue that it’s individual people committing the crimes, but I disagree. A political and economic system based on creating inequality and competition and ever-increasing pressure to have more, take more, own more creates these monsters. It always has.

Look at other places. The countries with less income inequality, with a better social safety net, with fairer laws, with GUN control – well, there’s less violence. Unless you are in the middle of a war zone, there’s not much that matches the violence in an average US city.

The US prison population is over 2 million, more than those incarcerated in CHINA. 1 in 32 Americans are under correctional supervision. Everyone knows about the imbalance in racial background in the prisons, but with this many people incarcerated, a lot of people of every colour, sex and background are doing time.

And then there are the guns. Everyone wants one. Florida crowed only last week about having issued their 1 millionth concealed gun permit. People are getting their legislatures to pass laws to allow people to bring guns to work, to coffee shops, to wherever.

Every time there’s a big shooting, the NRA tells people that the only thing that will keep them safe is more handgun ownership. They institute things like laws that allow you to shoot anyone you think may be trespassing on your land. Note: don’t go to a stranger’s door in the US and ask for directions.I am certain there will be some idiot who suggests that this shooting in Connecticut wouldn’t have happened if the teachers were armed. The NRA have a convenient “Women on target” program to teach women how to shoot pistols – perhaps this will become part of teacher training? 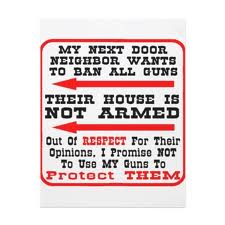 I am in astonished grief about all the poor children and teachers and family members of this man who were killed today. I even spare a bit of grief for the man. But grief is not enough. This has to be stopped. It’s insanity on a country-wide scale.

I think the only solution is to start an embargo around the USA – no one buy anything from there or travel there until they pass some decent gun-control laws. And here in Canada, make sure our safety net is secure (fix it), and throw our Conservative, wish I had a gun too, government back into the oil sands.

It’s important. We’re up here in Canada, just waiting for the wave of hatred and killing to surge over our border. Our income inequality is worse than in the US. The only thing saving us are our gun laws and our inhospitable weather.

Incidentally, I googled “no guns” images, and these were on the front page. Including this one. I could cry, all day. How many more must die?

One thought on “USA? Stay Away.”