“Manichaeism taught an elaborate dualistic cosmology describing thestruggle between a good, spiritual world of light, and an evil, material world of darkness. Through an ongoing process which takes place in human history, light is gradually removed from the world of matter and returned to the world of light whence it came. Its beliefs were based on local Mesopotamian gnostic and religious movements.”

Ever have one of those days where, for some reason, words appear in unusual frequency, words you’ve never heard of before? This word, Manichaean, passed through my life with odd frequency yesterday – first through a FaceBook posting by my cousin, then in a book about the Origin of Satan I was reading. The book, “The origin of Satan: How Christians Demonized Jews, Pagans, and Heretics” by Elaine Pagels, is a clear, fascinating, and eye-opening look at the Gospels and early Christianity. I was sent it by a dear friend who knew I was writing a story about evil and Satan as part of my 3 novella series.

But be that as it may, the confluence of Manichaeanism concepts yesterday played into my writer’s mind in a variety of ways. The writing inner editor, who either groups writing into “ooh, great!” or “this sucks”, who tells you you are a writer or a hack, who does not allow for greyness but insists that every single word be perfect and therefore freezes the writer into immobility…

It also struck me yesterday because I’ve had to give up another task I took on because of my MS getting worse. At these times, I do a bit of grieving, and I tend to get unreasonable. I see things in black and white, in Manichaean terms. I am either healthy and able to contribute, or I am meaningless and merely using up spare oxygen.

Of course, in my reasonable mind, life is full of grey spots. Writing can be good enough. First drafts in particular can be rotten but good enough – ideas get put down on paper, your creative mind is engaged, progress is made. Characters are multidimensional, not all or nothing. And my MS isn’t ruining my ability to do anything – just changing the parameters.

I hate letting people down, most especially myself. I seem to be doing that a lot lately. So it’s time to readjust and set my goals in areas of grey. It’s a wide field, and there are colours underneath the gauze. 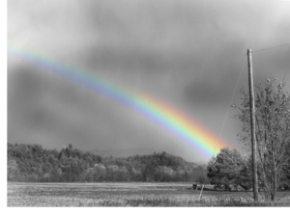