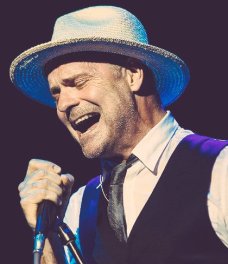 There was a moment at the end of last Friday’s epic Tragically Hip concert when Gord Downie broke down in tears. No one made a comment. No one has commented since, as far as I can tell. But he was sobbing, his face spasmed in grief, his chest rising with deep, gut-wrenching sobs.

It was a moment. He flipped, made a face, motioned to the audience, and was ON again.

I am curious. Of course he has lots of reasons to sob – his diagnosis of terminal brain cancer, the end of a tour filled with love and affirmation of his life’s work, pure fatigue. He must be exhausted after such a tour, coming fast on the heels of surgery and radiation.

But the rest of the evening, he was so obviously enjoying himself. What turned his emotions on their heel at that moment? I wanted to send him a hug and chicken soup and some dark but not too dark chocolate and some really good whiskey all at once.

I’ve kind of been there, a bit. Before I was finally diagnosed with MS, they thought I had his very same cancer. The doctors told me it was probably a glioma, in my cerebellum. Those who know brain anatomy know that this is a sudden death sentence. I was 49 at the time.

In retrospect, I handled it badly. I had just separated from my husband of 23 years. My kids were still in shock at that. I couldn’t, in all conscience, visit this upon them, so I joked about it. “Hey,” I said to my youngest, “You’re good with graphic design. Could you make me a ‘Catch her before she croaks world tour’ shirt?” I told them my plan was to cash in all my savings and travel as long as I could. I didn’t tell them what I told my friends – that my plan was to kiss men in every country I went, to see if they tasted different.

My goal in joking about it was to make the kids not take it seriously. I don’t think they did, and in that respect I think I was successful.

But I grieved alone. Grieved the potential loss of seeing the kids grow up, see how their lives went. Grieved the loss of accomplishment I could have had,  the joys, the sorrows, the fun, the CHOCOLATE. On the other hand, the dieting I have done my whole life in spasms seemed unnecessary now. I knew the cancer would eat my body, pare it away.

Of course, I looked up gliomas on the internet. I figured I had six months before the vomiting and horrors started. I knew I wasn’t going to do chemo – had seen both parents through this and it wasn’t going to happen, ever. I did all of this research alone, numb, unable to take it on, not really.

I waited. Waited for the MRI that would let me know what was going on. I waited for two months – an impossibly short/long time. Short enough to make me worry I really WAS going to die. Long enough to give me time to chew my stomach raw. In Canada, our tests are rationed by degree of necessity. Usually, MRIs take over a year. The night I had gone to emergency with my vanishing vision, when they found the spot, they wanted to do an MRI that very night. Terrifying. I didn’t show it, but I was gazing at a precipice then, seeing darkness open in front of me. I didn’t show much to my dear friend Bob, who was there, or my ex, who came. I’d called them when I had to sign for the dye in the CT scan, thinking that if I did react to it, it might be good to have someone explain things to the kids.

Eventually, after I’d just gotten to the idea that perishing in six months might not be so horrible after all – no more icy winters, no more work, no more responsibilities – I got the results. Nope, I wasn’t dying. They had no idea what that spot was. They still don’t know. It is still there, probably has been there since I was a kid.

Instead, they found lesions and holes all over my brain and spinal column. I had MS. Instead of spending all my money (and to be fair, my ex’s) in a wild play spree, I would have to hoard it, guard it, keep it safe so I could afford a good care facility should my disability take hold. Because MS doesn’t kill you. It just takes things way bit by bit until your body gives up, lets infection take hold, and you die in septicaemia, riddled with infection and unable to wipe your own runny nose.

It’s funny, but at the time, that seemed worse than the alternative. I remain undecided. But merciful gods have made my progress slow, and I’ve had lots of good times since the diagnosis.

So Gord, I hear you, man. I liked the way the announcers said “what MAY be their last concert”, offering that thread of hope that you, like me, might be offered a lifeline, a chance to see more, live more, sing more, write more. I so hope so, for you, though at some times the rapid exit might seem like a blessed release.

And thank you for letting your emotions show for that second. All of us who have been in your position, even partly, appreciate your openness.

3 thoughts on “On the Tragically Hip, terrible diagnoses, and the joy of embracing life”