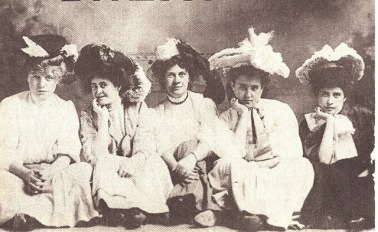 I am one, I think, and yet I am filled with puzzlement at them. I have a group of marvelous women friends who I adore. We all would come running to whomever needed support, would offer casseroles, muffins, homemade soup, a warm shoulder to cry upon. My friends keep me alive, make me laugh, give me joy.

But many would leave the recipient’s house, commenting to each other, “Well, I wouldn’t have dealt with things THAT way,” or, “Where’s that man of hers? Why doesn’t he help?” or “Did you see what state her house is in?”

It’s the same thing that makes some (never me, I simply don’t care) rearrange the dishwasher if someone else loads it, that makes us repack suitcases for children and men, that sighs at the general incompetence of everyone except us.

It’s why women who succeed are universally regarded with suspicion – by other women! – and why we have never been able to fully mobilize to take back our rights from abusers and others. I still think the best way to frighten abusers into submission is to show up en masse

“Whose that over there throwing stones at us? Is that Gladys?”

at court dates and funerals of those harmed and stand there, as the police do, a physical and huge threat. We are over half the population. But no one will do that because of the sneaking suspicion that the woman might have somehow deserved it – after all, he’s so sweet…and he might like us. Heck, we might even date him. He wouldn’t hurt US.

So here we are in the midst of an American Presidential election between a career politician woman (gasp! No!) who is somewhat more terrifying than all the male career politicians (somehow that is okay, though slightly sleazy), and on the opposition, an utter boor. And he is still in the picture, though everyone is hoping he’ll step down and

“My name is Mike Pence and I own your uterus!”

let a truly evil man take his place, one who talks smoothly with the tongue of repression, rather than revealing his slithering insides.

Well, say many, at least it wouldn’t be a WOMAN. Sadly, even women say this, their envy of success being so poisonous against their own gender that it blinds them to the fact she is better qualified than anyone else who ever stood for the office. And allowing them to accept men who openly or quietly demean women, treat their bodies like possessions, shut them out of top positions, keep them virtual slaves.

I can’t help but feel enraged, though I know the green fire of jealousy burns in me, too.

So how can we fix this seemingly permanent line in our nature? Can we erase the poisonous green and replace it with a kinder, springier one?

I’ve met some women who have. One of whom left us this week – my brother-in-law’s sweet mother – one of the kindest women I’ve met, with a belief in her faith that must have been her weapon against jealousy. Unlike many faithful, she never used it as a hammer with strangers. She simply did good.

I know another few women who do this, who step back from selfishness and do good in their quiet way. I love them all and struggle to be more like them.

But much as I love them, I wish we women would get together, stop doing good quietly, and take over the world up front. Enough quietly rearranging the dishwasher in the background, while sighing in exasperation. Let’s teach our fellow world inhabitants how to do things right. As with these quiet good women, we can show by example, but frankly that’s not working well enough. A thousand people tidying the Titanic wouldn’t have saved it from sinking. A woman who knew how to drive the boat who was able to wrest control from the men who blustered their way in charge might have. It’s time for women to do some blustering.

“If only there was a smarter person to take charge! One without breasts!”

But you know what? Probably in the lifeboats (of which there would have been enough because, um, planning), other women would be whispering, “Who does she think SHE is? She should mind her own business.” And the men would be shouting four letter words and commenting about breasts.