I am beyond the ugly crying stage and right into the moody despair phase, and I can’t seem to shake it. It’s that being surrounded by bad things you can’t do anything about feeling…

The riots in the US and the return of Black Lives Matter protests (followed by the expected, ‘well, all lives matter’ bleating from the entitled), the unwelcome commentary about how, honestly, these people should just protest peacefully, the frustrating governmental non-response — or what I call the Smuckers Jam response (cover anything with enough jammy sweetness and it will seem tasty, even with an ugly name) – it’s all too much.

Come ON people! Way back in the 1970s, when I was living in the Boston area, I was part of a high school group called “Action (insert year here)”. We were involved in protesting the appalling state of inner-city schools, primarily black ones. At that time the push was on for busing of students from the inner city out to the fatcat suburbs, and of course, all the folks in the suburbs were appalled that black people would be sharing bathrooms with their precious babies. I went to a meeting where parents actually shouted that their kids would catch STIs from toilet seats shared with these students. 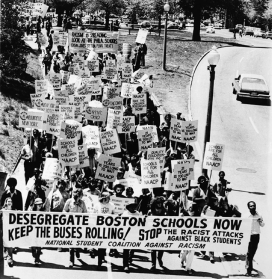 Protests of this objection ensued, not only in my little lily-white racist suburb but all over the Boston area. At the time, I was quite daring and snuck into Boston to join in a bigger protest. It was probably my only serious disobedience as an adolescent (I missed out on a misspent youth) and was about as effective as most of such things, but I felt it important to be there.

My parents would have killed me, primarily because of the risk to my person. Counterintuitive to kill me for that but hey, parents. My mum once hit me with a hairbrush because she was worried I’d been beaten up on the way home from Catholic Education class. Parenting isn’t always a rational thing, as my kids know well.

I was scared as hell at the protest. The Boston Police had their horses out and were pushing them through the non-violent crowds, waving batons at folks, and it wasn’t long before things got riled up. I’d left by then, taking my lily-white terrified behind back to safety.

Back then, I could not believe that in that day and age people were so uninformed, so racist as to deny education to students based on skin colour. (Of course, I know now it was all about property taxes and the haves really not wanting to share anything with the have-nots lest they get uppity and (GASP) want to move in next door.) 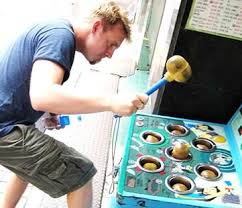 I still can’t believe it. We’re now 44 years on and it seems to me little has changed. Surely we have learned something in all the years and wars and disruptions over the years? No. People are still trapped by all sorts of nasty frameworks and by golly, in North America at least, the Blacks and the Native populations (and now the Asians, again) are seemingly never to raise their heads without having them stamped into the ground in some endless game of  Whack-a-Mole.

Perhaps it IS time to be violent. Perhaps it IS time to shout louder than the NRA and supremacist idiots and make it known that we just don’t want this anymore. Perhaps this is the time to finally shake up the status quo. Heaven knows, even simply as a woman, I am mad enough about so many injustices to set some fires.

I have to admit, though, I’m scared. My still lily-white arse is 44 years further on, too, and I fear that once this violence takes off, it may be impossible to stop. Winter is a long way away. There are too many agitators working to overthrow democracy in the US who like to scare people and go about bopping people on the head, and the ‘leadership’ is using even the peaceful marches as an excuse to take away rights.

I fear greatly what will happen in November.

Up here in more quietly racist Canada, there are a lot of grievances simmering just under the surface. Deserved grievances. And, like the Coronavirus, violence can be infectious. I am worried it will spread north – especially during the recession to come after the pandemic. The competition for jobs will be harsh, people will be bitter.

I long for some leadership that would step up to the plate and hold police accountable for their appalling statistics, who would order some sort of investigation into the way things are being done…but wait…

That was done before – in the 70s, in the 60s even. Investigations happen and commissions are held and many many trees die in mounds of paperwork, and things JUST DON’T CHANGE.

If only I thought a revolution was effective, I’d be all for it right about now. The problem is, there’s disruption, violence, and singing in the streets, and then it all goes back to how it was before, except maybe worse.

Like the Boston busing issue. Or the Arab Spring.

One thought on “Conflagration, or oh help, la!”