I’ve been reading a lot of research results lately and I’m starting to get disturbed. There are millions and millions of little mice going the way of all good research animals to help us figure out MS, Alzheimer’s, Parkinson’s, and lots and lots of other disease entities.

I am grateful for their (unwilling) service. I can’t say to stop the research on these poor wee things, because their contribution has been massive. But I am beginning to worry about the net karmic loss of snuffing out all those millions of mice for every year of study. Sooner or later, the balance has to shift and we’ll all start dropping from some mouse virus and it will all be fair, really, given how many tiny souls we’ve sent over that crowded rainbow bridge.

Every time I inject myself with my “disease-modifying medication” I send a wee thank you to the mice who squeaked their way through the multiple trials before we even dared to give it to humans. There’s even a special kind of mouse, bred to develop an MS type illness so then they can try to treat it. Mice bred to develop all sorts of other illnesses, too. So not only do they live their lives in clear plastic cages with little sensory input, but they get illnesses they normally would never have to deal with.

Upon such tiny lives are ours based.

Now, I know, your average wild mouse has an extremely short lifespan. We aren’t 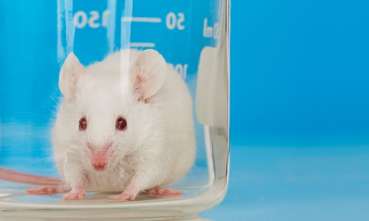 necessarily changing the length of the life of these mice. We’re just making them miserable for all their lives.

Of course, I may be wrong. Perhaps there is an inheritability acceptance of their sterile home. Perhaps, like families who refuse to leave Cape Breton or Gimli or the Eastern Townships for generations, these little creatures know nothing else and so think they are in paradise. After all, they get fed. Their nests are clean. I’m not sure if they get to mate with other sterile mousekins (but they must – otherwise where would new sterile mice come from?)

And there is hope. Mice don’t accurately represent human diseases after all, and they are pricey. So many doctors are giving them up as research subjects. Stem cells are making big inroads into the mouse subject market.

I do hope we stop using animals for research eventually. Maybe we could use those stem cells. Or Republicans. Or the Liberal government in Nova Scotia at present. Something with no feelings. Just sayin’.