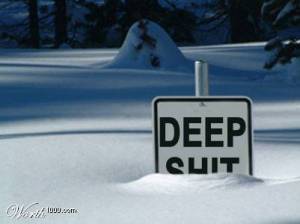 They are threatening a “snowpocalypse” today throughout North America – a huge storm spanning from Texas to Nova Scotia, throwing fistfuls of snow and spitting ice on everyone in-between. Everyone is talking in breathless tones on the weather channels, speaking of disaster warnings and the need for shelters and calling out the National Guard. On the weather channel today, a man in Oklahoma stood in a full inch of snow talking about how all the public buildings were shut down in this disastrous storm.

When I was a kid, I don’t remember this total sense of panic about big storms. Maybe it existed and I just wasn’t clued in, but I can’t help but think that part of this is the inflation of news hysteria.  As a weather broadcaster, these are the things you live for – the moments where you might make the main news broadcast instead of just the weather at the end of the news, after everyone has dozed off.  So the weather becomes hyped to the max, creating panic. It’s the only time the weather broadcast can out hype war reporting or political squabbles.

I read somewhere on Facebook about how they really wanted to read that bookstores were mobbed in preparation for the storm. It’s a lovely thought.  What if, instead of panicking, we all just settled in and appreciated winter’s might, its beauty, the roar of a fire, and the opportunity to slow down and read a book, talk to one another, play a board game by candlelight, hold each other. Yes, I’m not denying that the weather can be dangerous, and there’s a need to protect those without appropriate heating and support, but a lot of the danger would be minimized if we just stayed home and relaxed into the storm. Roads would be safer, there’d be a smaller demand on infrastructure, we could all calm down.

But calmness doesn’t work on the news.  So weather reporters get more and more hysterical as the storm approaches.  Everyone races out to buy enough food for a month. And no one seems to cancel anything, as if everything we are doing is totally important – children have to go to practices, school just can’t be missed, work can’t rest for a day. And yet, if we paused everything, it might just be okay.

And maybe we could all read a book.  And how lovely would that be?