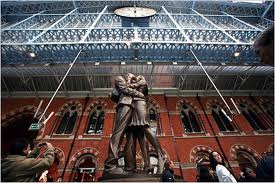 Just wandering through old copies of the New York Review of Books, which I must say is so much more than that, and came across a wonderfully evocative report about trains, train stations, and their demise. I have to admit to a terrible and perhaps not deserved fondness for trains.  Here in Canada, Via One is truly graceful travel, but that doesn’t help when trains are late, which they often are, or when they no longer go to places I need to go, like St. John, NB or Calgary, AB. Regular cattle car train is still at least as comfortable as plane travel, without the invasive body searches. It’s often faster, given the need to be at the airport forty hours beforehand to allow for passage of anything dangerous in your gut.

My fondness for trains is born of my early married days, when my ex and I lived in London, England. When we got bored with our studies, we’d wander off to a random glorious train station, filled with air and light and people and the excitement of being able to go anywhere.  We’d check to see where the very next train was going, and we’d jump aboard, with nothing but a spare pair of undies and a toothbrush each. We ended up in Calais, Dieppe, Brighton, York, Rhu, all over. Every time, the train was splendid, whether slow or fast.  The rocking motion is soothing, the conversation with fellow passengers is always fun, and the conductors are generally well-dressed and polite.

The last time I took a long train ride, I was visiting my son in Kitchener. I was offered beer by a bunch of people who had just toured the Steam Whistle Brewery – and the conductors kept themselves busy until we were almost done the can before telling us it was, strictly speaking, not allowed to BYOB on board. Nice.

The train station in Toronto has some of the grace and excitement of the great old train stations – grand central station in NYC is worth a trip just for itself – but nothing matches European train stations, with their history of surviving wars and transporting troops, war brides, poets, musicians, philosophers, thugs, in short, the entire democratic mass of people, laden with hopes and dreams and sometimes the belongings of others. They are magical places, even without the creation of the track 131/2 for Harry Potter’s clan. Dreams ride through the air on wisps of leftover steam and diesel fumes.  Romances bloom, books are written and read.

The appeal is the democracy of the transport. At any time, you could be sitting by anyone. Playing guessing games about people’s lives is ever so much fun – even more so if you get a chance to chat to them and check your guess.

I know trains aren’t popular with everyone.  We seem focused on the need to control our own travel. But as I get a bit older, there is intoxication in just letting someone else take charge, in letting the zen of train travel slow my progress a bit and let me see the world around me.