Choosing to write about religious topics is risky. All my writing book advisors go on about ‘finding your niche’ and being sure people want to read what you are writing…and of course, being contrary, I wrote the book and then wanted to publish it. It’s a bonus if people buy it, I told my self.

But my self is a horrendous lying thing.

Of course I want people to buy it and read it and like it or think about things. Even if it isn’t easily classified, if it doesn’t have a GENRE, really. Does everything need to have a genre? Apparently, if you want to be found.

So why write about Blessed Mary if the book isn’t genre?

Because of Elizabeth Warren. Or any of the many many other women who are overlooked, whose accomplishments are minimized, who feel like they have to shout to be heard (and then they are called strident). Women who cannot be seen even if they want to be. Women who are told they have no purpose except to make men happy and birth the next generation

That happened to Mary. Here she was, the mother if this big important man, and her contribution was so minimized she barely existed until the Catholics used her image as advertising copy and trotted her out everywhere like a show pony, changing her completely as they did so. They used her as a friendlier contact point than a bleeding man on a cross.

She was the perfect mother figure, a loving presence for all the church. Then the church men started playing with her. (I refuse to call them church fathers.)

They needed to make her unusually pure. Never mind the ‘why’ — what about the how? The church men were puzzled. Oh, right, she must have been born without that original sin thing – that’s how she gave birth without any pain. (Say what? Given that men were also telling every other woman that their births had to be painful because of Eve and the

At least she’s having fun here…

apple (a set-up if ever I heard one), this all seemed a bit strange.)

But wait – how could she have been born without original sin? Well, her parents must have been unusually holy. And their parents before them, and so on, like some backward-dated Ancestry file. Never mind that previous documents assigned the line of David to Joseph. “We can change that!” the church men said. “While we are at it, let’s make her ever-virgin, unsullied by man. Because women who have sex are dirty. Men who have sex are dirty, too, but they have urges that must be met.”

Despite being the mother of THAT guy, she only gets a mention at birth and at his death. Oh yes, except she is brought up to ‘fail’ him by asking him to make the water into wine at a friend’s wedding. Apparently, this indicates that she doubted his mission. I’d argue that this would have proved that she thought he had unusual powers, but of course, she must have known that given the angel, etc, etc.

That’s a problem, too. How did a baby form in her unsullied womb? Lots of ideas were trotted around, none of them particularly convincing, until people just gave up and said it had happened. The bible doesn’t say much. That hasn’t kept people from discussing how, though, and mostly making the pregnancy seem like a total out of body experience for Mary.

This resulted in ridiculous discussions like one I had in my Mariology class, about THAT guy’s DNA. “Of course, he must only have a half set of chromosomes!” one woman opined, forgetting the need for a double set to make that baby grow at all normally. Or let his beard grow.

I can find no mention of Mary’s parenting of THAT guy. But surely she had a huge role in that? Perhaps she was the source of so many of his ideas about mercy and wealth and kindness? What if Mary was the actual founder of the religion we all call Christianity, and if THAT guy had to take the reins because women weren’t even allowed to speak then?

You see? Once you start looking at Mary’s story, questions arise. Why are the church men so mean to her, so determined to wipe her out of the picture, while still using her as a meme? As I dug into books about Mary, I found myself feeling frustrated on her behalf. I wanted her to be given fair coverage, for her and the women who followed her.

I tried to present a story about Mary, done with respect and care. Oh, and let her have a little fun along the way. I’d like to hear from you if you think if I reached that goal.

Find my book on Amazon.

Well, it’s out in the wilds. The ebook version is launching on Saturday. 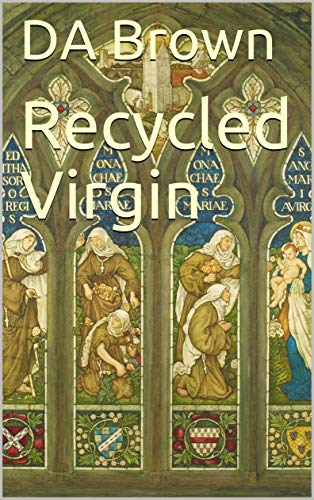 It all seems such a small story, so meaningless. I mean, I like it, but I am having trouble dealing with the thought of my friends reading it and then having to make a comment on it, either positive or negative or, ugh, patronizing. One fellah commented that “some of my chapters seemed fun.”

I’ve taken out a contract on that guy, and YOU KNOW WHO YOU ARE! (Kidding, of course…)(Well, maybe…)

But it’s all a bit like doing a public speech, and meeting and greeting people afterward and when you run to the washroom at the end of the festivities and peek into the mirror, maybe giving yourself a confident, “you did it, girl!” smile, you notice a 3-foot long chin hair sticking straight out and wiggling with every lip flex.

Did they see it? How could they miss it? How do those things grow so damn fast? You know you’ve peered at yourself in your home mirror, holding your face every which way and shining lights and there was NOTHING THERE that morning, and somehow this hair grew like Jack’s beanstalk in a matter of hours.

You wonder in a panic if the hair scraped the face of the people you were talking with, and if they felt it and decided not to comment, like those friends who don’t tell you you have spinach in your teeth or that your hem is tucked into your tights… Maybe they were being gentle with you, sensing your inner fragility, realizing that under chin hairs can destroy any semblance of professionalism. You can see it is almost reaching the mirror, across the sink.

Of course, you have not brought hair removal devices with you and it just won’t leave to tugging, so then you have to go out and REJOIN the mob, knowing full well your hair vine will be spotted by EVERYONE.

I took my beloved dog Pickles to the groomer once and when I was picking him up, shivering and pinkish and looking hurt to his soul (which is why I ended up grooming him after this because he didn’t find it so traumatizing, but I digress), and the groomer, who I had trusted with the animal I loved the most in the world (the kids were in a horrid stage, and let’s not mention the ex) told me that the dog hairs from her clients had slipped off and rerooted themselves in her face.

I gazed at her, non-plussed. What does one say? It seemed wrong to talk then about the biology of facial hair and how it didn’t behave like a seedling. She, after all, had a few sprouting from her chin. All different colors, she pointed out, because of all the different dogs. I was left speechless.

The more important issue was why did she mention this to me?

Well, yep. I ran my hand over my chin when I got into the car and sure enough, a hair-vine was extruding from my face. How long had I been going around like that? Who knew? Cos, you see, once these hairs grow a certain length (you official beard growers know this), the hair gets all soft and molds itself to your face. Well, unless it is yearning for freedom. Then it reaches out, struggling towards the unwary, terrifying them. Whacking against walls and tangling in scarves…

So, the book thing is sending its little horrifying curls out into the world and I keep wavering between singing and dancing (and being profoundly grateful for the support friends and family have shown me) and wanting to pluck it like a chin hair out of existence.

Either that or grow a beard so it all seems like it should be there, filling my author’s face with other books and articles and writing like a demon to get things out. (Next book: DIsgusting the Devil is on the assembly line) Creating a new framework so that this one eases gently into a crowd and thus is less obvious as a solo event. Maybe it’s time for me to embrace my writing beard?

So, I hope you have a look at my book, maybe read it, write a review, hostile, friendly, grumpy or bored. I’d love to hear what you think…No, really, I would. Just let me check out my chin…

Will be revising my book over June, hoping to send it out shortly afterwards…;-)

I’m not a winner, but a contendah in the top 12, for “Recycled Virgins”
http://www.3daynovel.com/2013/02/26/announcing-the-winners-of-the-35th-annual-international-3-day-novel-contest/