I’m getting an understanding for the agitation caused by the Mistral. The wind has been howling around my place for hours and hours, making the cat’s ears twitch and getting loud enough at times to make the sound of the radio vanish.

It’s good writing weather, not pleasant enough to escape outside, not gruesome enough to make me hunker down under the blankets and hide. It’s dark enough to make thought of evil characters easy to produce, warm enough to keep my fingers cozy on the keys.

And yet, I’m not writing.

I know it’s Nov 1st, start of Nanowrimo, I know I have assignments due for my writing class (and fair enough I did work on that), but I’m instead reading and percolating things and doing my usual mental canoodling. Tomorrow, I hit the computer and get to work.

I didn’t want to read Twenty-Six by Leo McKay, Jr. even though it was chosen by the powers that be to be the one book all Nova Scotia should read this year. One Book Nova Scotia. It’s a new thing.

Why didn’t I want to read it? Well, because it has all the gritty bits of both CanLit and Atlantic Literature – filled with poverty, drinking, disasters, mines, mining disasters, generations of doomed families, family dynamics, and so on. It seemed heavy going. I prefer a bit of joy in my reading.

Like when the villains are captured in mysteries, for example.

But there I was at the library, waiting for a workshop on researching to begin, and it was RIGHT there, in front of me. The librarian waiting to give the talk recommended it. She said it was a quick read and that there were several times she felt tears coming over her when reading it on the bus. She seemed the type to appreciate good writing – how could I define that? Hmm. She had intelligent eyes, a sense of humour, a feeling of joy in discovery, a genuine thrill when asked to explore new ideas or research areas.

I liked her. That was probably the reason. If I like someone and I think I have an appreciation for good books, ergo, she must have the same.

So…well…I picked it up. Still a bit hesitant, still not really wanting to wander in its grimness. The first character introduced has the unlikely name of Ziv. He’s drunk (not unlikely in an Atlantic book). He lives in a mining town. A dilapidated mining town.

And suddenly all the stuff I’ve learned about place and literature and how Atlantic Canadian writers see their lives thrust against the backdrop of sea and death and weather god damn it the weather and the war and hardship and on and on leapt into my mind and I just had to read it.

Even though I know I’ll want a drink after I’m done.

Oh, and btw? One Book Nova Scotia ended on November 9th for 2012. I’m already behind. They suggest I try Nanowrimo, which I’m doing too but have delayed to read this book.

And let me tell you about the weather….

It should really be the greys. Blue is a pretty colour. Grey is, well, grey. Like black, but without the enthusiasm.  Or white, but in a slovenly way.

Although, truth be told, both colours get  a unfairly rough go.  Today, for example, outside my window, fog is rolling by.  It’s grey. Again. Day 15 or more. Minute by minute, the colour changes as the fog swirls, lifts, re-descends. Normally, it would be beautiful. Today, it is merely tedious. But still charming in its own right. I feel enclosed in wool swaddling today – my visual field outside the window is only a few feet at times, and it makes me feel cozy. If a bit damp around the edges. Watching it lighten bit by bit as the day burns off the fog is exciting, like unwrapping a present.  Will we see blue sky today?

But grey is never invigorating.  Not like blue – sky blue or royal blue or even navy blue, teal or indigo or baby blue. Van Gogh’s blues shout from his paintings, Monet’s whisper seductively, Maude Lewis’ sing happily. It seems too varied a colour to be associated with depression. Yet it is.

And blues music is just too much fun to be depressing – the beat throbbing onwards, the growly sax, the gravelly voices and hearty tones. It’s hard to listen to it and be depressed.

People with depression often speak of how the world bleaches out. Colours become muted, like my view through the fog. A friend of mine who suffered for years with intractable depression finally received a novel treatment, involving direct brain stimulation.  She was finally able to surface, and her comment was that suddenly, the greys had receded and, as in the Wizard of Oz, she had stepped into a Technicolor world again.

So, as we here in the Maritimes look forward to another  weekend of greys, perhaps it’s time to get on with some blues – groove with sunshiny and bluesy music, paint with colours and  play. And tap our heels together and wish for the sun. 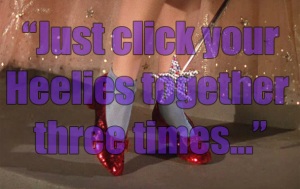